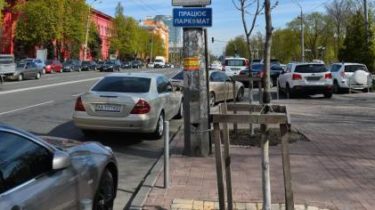 Profit from the capital’s car parks could rise by 500%. This suggests the social activists, who carried out the experiment “Fair Parking”, says the story TSN.19:30.

Five Parking areas in the center of Kiev they put the monitoring posts. The first results of the project are impressive: profit increased 3-4 times. The man in the orange t-shirt and cap, you can record an endangered species because he is honest Valet. At least it says so on his back and chest. All the money collected from drivers for Parking, Alexander gives in good faith in the meter. The man in the green shirt looks out for the honest Valet and monitors the receipt of the money. This experiment by social activists called “Fair Park”. “Every day I send reports via SMS. This site is 1000 UAH – 1200 UAH, depends on the dynamics,” – said the public monitor Paul Kusapin.

The day these guys manage to collect more money than workers “kievtransparkservis” for a week. If you do not put money in his pocket, the city budget receives 3.5 times more. “If honest work – 3.5 times. To be honest, Yes. But at a salary of one thousand hryvnia,” – says the Valet KP “kievtransparkservis”

“Tea” for the attendants and their patrons, experts say, each year is 100 million hryvnia. Mayor Vitaly Klitschko decided to end this practice and has announced since August 10, the elimination of Parking in Kiev. For the week, payment for Parking will be made in three ways: via the Parking meter, cell phone or purchase a monthly pass. Even honest Valet Alexander admits – to sense from it will not. “And who will control and check drivers? They simply won’t pay,” he said.