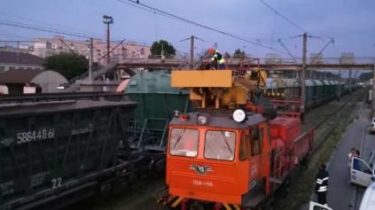 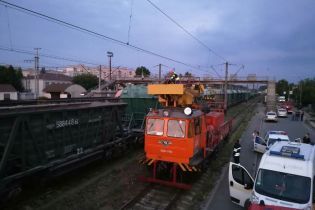 On Friday, 4 August, at 04:37 on the railway station “cherry” on a freight train, found the young man unconscious.

According to eyewitnesses, the guy climbed on a train to make a photo and it was hit by an electric current.

Because of the powerful shock, a guy born in 2000 died.

Rescuers took the dead boy from the car of a freight train.

In Kharkov, in the street from shock, killed 17-year-old girl

Recall from Ternopol guy survived after being struck by a current in 27 thousand volt when trying to make selfi on the train. “The young man climbed on the wagon to take pictures. He approached at a distance less than two meters to the wires of high voltage line and was electrocuted”, – militiamen told.

According to workers the path, she heard a strong sound, like an explosion, and later, along with colleagues understand that the car is a stranger, who was electrocuted after he was SSES and the police.

As noted, the rescuers had to climb up on the wagon of a freight train and with the help of special equipment lowered the victim to the surface, passing doctors.