In Ukraine will cancel the rate of heat consumption per square meter. “Pitfalls” counters 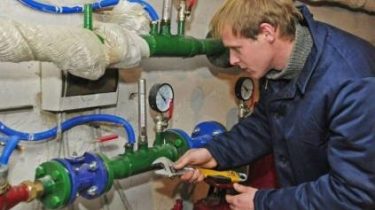 No more norms of heat consumption per square meter. The Ukrainians will only pay according to the meter. In Ukraine began to operate a new law that requires every house to have a house-wide meters for heating, cold and hot water.

Currently, the figure of communal counter the heat is distributed proportionally on all apartments in accordance with their squares. But the new law will affect exemptions if part of the apartments have individual heating.

Apartment Ludmila Pobuta heats the boiler. From Central heating the family refused. And since you pay only for the gas. Now the law will force her to pay for heating of common areas, and for losses.

“We have our own boiler. And to pay for the other counter is also supposedly in our interests. Except that it will be a paltry amount that won’t hurt our wallet. Then it could be nothing,” says the owner of the apartment with individual heating Lyudmila Pobuta.

Another case – if the house temperature is below normal. Apartment Natalia Gunduk – at the end of the chain heating. So every December, she calls the Commission not to pay for bad service. The law says that now the difference of the actual temperature and the norms will cover the neighbors who have heat.

“For example, constantly going to complain. I have a cold. They filed a coolant with higher temperature. On the upper floors was hot. They began to open the Windows. On Gcal of heat left over. And the warmer I got. That is, we still spent warm,” – says the hostess corner apartment Natalia Gunduk.

So that so she quickly repaired, will be interested all the neighbors. I need to fix the heating system to heat distributed evenly, to insulate the building.

Videocracy will pay the utility only in terms of communal counter

In new houses where it is possible to supply heat meters in each apartment, they will become mandatory. Despite the fact that cost 6 to 10 thousand hryvnia. Their performance will take into account, when there will be at least half of the residents. Otherwise there is confusion.

In Lyubov Morozova was not an individual counter. Urgently put it, because her one-bedroom apartment began to write off the values of total counter.

“The problem is because of the communal counter. Apparently, those premises that are not residential in our house, this is the first floor is the basement, add-ins. We have a loft on the 20th floor. On bills in the same February and March, when I already was a counter, behind my apartment was 153 hryvnia, and the common parts is still 400-500 hryvnia,” – says a resident of the flats with individual meter Lyubov Morozova.

In every fifth house in Ukraine still needs to supply the total counts. According to the law, it will make the supplier of heat. Two months before installations have to warn people and to give an exact cost. The average is 46 thousand. Amount break of five years and will be divided between all tenants. The services of the operator can refuse to do it yourself. The main thing – to have time before 1 October of the following year.

For details, see the story of Oksana Mulyar.