Caches of grenades and ammunition: Country village near the front, the ATO will search after tragic explosion 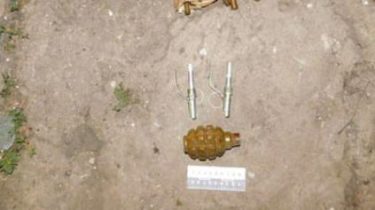 The court house in the village of Dachnoe Donetsk region, where the day before in a grenade explosion killed three people, covered with salt. So relatives of the victims to hide the traces of blood, according to a story TSN.19:30.

The explosion occurred at 23:00 hours and was heard in all corners of the village. The nearest neighbors came immediately and called the police. “I heard the explosion, but I’m from Donetsk – I thought I was home there in Donetsk. And then I woke up,” says one of the women. “Here is fine always has been. This is the case – once a year and stick shoots” – says a local resident.

The village is located 30 km from the demarcation line, so a war it didn’t hurt. Despite this, arms around a lot – it is recognized by all, including police officers. The court found the fuses from grenades and bullets. “Voluntary no extradition. During castings, of course, a lot of seized. And in fields we find the caches. Go with searches. Many seized grenades, ammunition – weapons, as such, no,” says the police investigator Larissa Galich.

One of four people who in the yard drank in a tragic evening, the crew was not allowed – her husband is in intensive care. In private conversation he explained that at some point the owner of the house brought home a package and pulled out a grenade f-1. According to the wounded, the dead owner of the house found a pack with ammunition on the outskirts of the village.