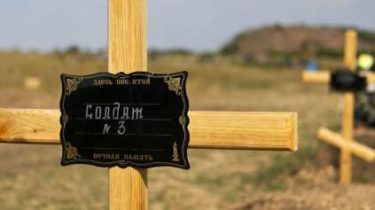 On Donbass there is a growing resentment among the personnel of the occupation forces because of the cynical concealment of Russia the participation of military personnel of the Russian Federation in the fighting.

“The command of the 3rd separate motorized rifle brigade (Gorlovka) 1 AK (Donetsk) of the armed forces hides deaths of soldiers in the reconnaissance company, which struck a mine during the implementation of sabotage actions. According to the decision of the management team, the bodies were dressed in civilian clothes and left in a forest belt close to the contact line”, – stated in the message.

According to the scouts, who arrived from Russia relatives assured that the dead never served in the army “LNR/DNR”, and the military command of the “republics” to their doom uninvolved, thus depriving families of mercenaries with financial support in connection with the loss of breadwinners.

It is also noted that for such cases of neglect of the command of AK 1 to subordinate personnel, a growing number of servicemen, unwilling to continue their service in units and formations of the corps.

We will remind, for the past day, August 6, fighters 18 times fired at positions of the Ukrainian military in the ATO zone in the Donbas and wounded two soldiers.