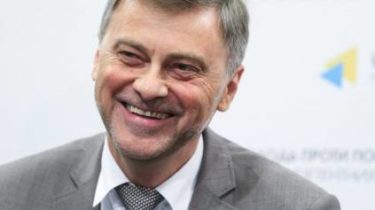 The managing Director of the Deposit guarantee Fund of individuals ‘ deposits Konstantin Vorushilin now – at the equator stay in this position. Plans to quit as soon as you perform the four tasks that I set for myself. Then wants to get back to business, where he came to the state structure.

“We’re all tired from everything going on. I, like Gontareva (head of the national Bank, which wrote the application on dismissal, but it is still not granted), came from business with the understanding that you need to perform some work and return back into the business. I have set ourselves four major tasks. Some of them are already completed. The first task – automation of payments to depositors. Second – the organization of transparent sales of all assets. But there are two outstanding issues. Firstly, the relationships with our law enforcement agencies. We do not have a single coherent work on the return of the removed assets (insolvent banks). Secondly, I want to seek a review of the cost of borrowing for the Deposit guarantee Fund from the Ministry of Finance and the NBU. If you do not solve this problem, the consequences will still fall on the banking system. When I decide all these questions, I will sigh and say mission accomplished,” Vorushilin said in an interview with “the League.Finance”.

Says the head of the national Bank it is proposed.

“Firstly, it is, as far as I know, nobody has been offered. Secondly, I have no desire to move somewhere for the civil service. I want to finish the work in the guarantee Fund and return to the business. Me the dirt already got, each trying to climb, to interpret events differently. Football is always familiar with those who sit in front of the TV. So here,” – said the head of the DGF.

VideoCAM officials are cashing in on the depositors of failed banks

Vorushylin for many years worked in Finance in the business Empire of the current President of Petro Poroshenko. Until 2007 he was head of the Bank “Mriya”, which Poroshenko and his partners sold the Russian VTB, then oversaw the financial and investment activities of the Corporation “Bogdan”. In the DGF Vorushylin came in 2014 in the midst of bankopada. Now the Agency removes from the market 90 banks and suing their former owners and borrowers who refuse to repay their debts.

The head of the Fund told how often his former business partner and now President of Ukraine Petro Poroshenko is interested in the Affairs of the Fund.

“He has a lot of work but us. But he helps us initiated a lot of important bills. Current questions of the President we wont bother you” – said Vorushylin.

“I am not a shareholder for a long time. IIB we created together. But the Bank never took part in the purchase of assets or the payment of funds to depositors: this is a purely market-based Bank”, – said the head of the DGF.

Vorushylin argues that the rapid growth of the assets of IIB administrative resources are not.

“It’s all talk, the Bank does not have administrative resources. It is growing due to the fact that some private organisations holding large balances there, because I think it reliable Bank. But, unfortunately, IIB, like all other banks, credits to the real sector, because the risks are large and on each loan it is necessary to form large reserves,” he explained.

Says that deals with other business partners. In particular, with the people’s Deputy from “Blok of Petro Poroshenko” Igor Kononenko. And assure that, they say, is not trying to solve the issues concerning the work of the DGF, because Kononenko is not included in the parliamentary Committee.

“He is not a member of the Committee on banks and banking activities with which we have close contact. If necessary, communicate with other MPs. Thank God, not only with Kononenko familiar. They support that you get them in something to convince. Just no support,” – said Vorushylin.