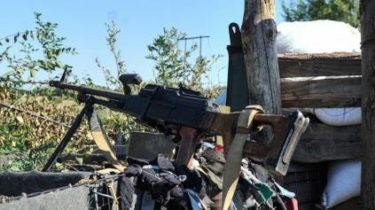 On the East of Ukraine militants 28 times violated the ceasefire over the past day. Three Ukrainian servicemen were killed and another eight injured, one fighting injury.

Also at the end of the day under the fire fighters were positions in the area Malacky, Krasnogorovka, Carmalita.

#Topod the Construction of the press center of staff ATO in 8.08.2017. At the end of the last day in the area ATO vddat…

Posted by the Press center of the ATO headquarters on Tuesday, August 8, 2017

On the Lugansk direction near Novotoshkivske, the militants fired at ATO forces in the area of Golden, Trinity and Novozvanovka. In one of these attacks under Novoaleksandrovka one Ukrainian soldier was wounded.

In the direction of Donetsk the intense situation remains and further on the outskirts of the Town and the mine Butovka.

Yesterday, August 8, at the headquarters of ATO reported that around 4 in the morning the militants began shelling of Ukrainian fortifications near Marinka. In response to the forces of ATO took out the enemy heavy fire. One of the arms broke down and burst. As a result of this tragic incident , two Ukrainian servicemen killed, five injured.