OSCE has recorded the shots near the pumping station in Vasylivka 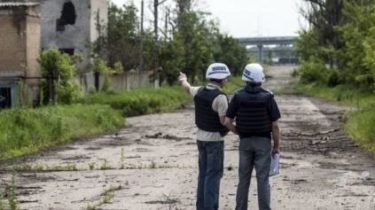 In the Donbass in the village of Vasilevka near pump station OSCE observers have recorded the shots.

About it reports a press-service of the OSCE SMM on Twitter.

“After monitoring using UAVs at the pumping station in Vasilevka OSCE SMM heard 2 turns and 3 shots of small arms in the radius of 500 meters”, – stated in the message.

1/2 When monitoring with the UAV on the pump.St. in Vasylivka #OSCE SMM heard 2 ocher. and 3 RDS. of arrows.weapons. in the tips. 500m #Factionalization

In turn, the first Deputy Chairman of the OSCE mission Alexander hug said that around the critical infrastructure needed sustainable ceasefire.

We will remind, in the East of Ukraine militants 28 times violated the ceasefire over the past day. Three Ukrainian soldiers were killedand another eight were injured, one combat trauma.