In Kiev, protesters paralyzed the work of several bus routes 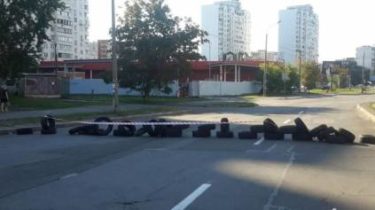 In Kiev, the local residents blocked the street, protesting against the construction of a petrol station.

About it reported in a press-service KP “Kyivpastrans.”

“10 Aug, with the start of movement of buses of routes №№ 17, 18, at the intersection of str – str. Akhmatova – str. Trostyanetskaya, continues the protest against the construction of petrol filling stations”, – stated in the message.

As noted, the operation of buses was organized along the route: metro Kharkov – str – A. Akhmatova St. – Trostyanetskaya str – str – metro Kharkov.

In turn, in social networks appeared information that the protests were attended by “aunts” who brought tires and blocked the road.

Probably many didn’t like that to drive on the street revutskiy was impossible. The road was blocked. However, the ne…

We will remind, earlier in Kiev protesters blocked the highway Kharkiv, demanding to restore water and electricity in new buildings. This resulted in the blocked movement of trams and buses.