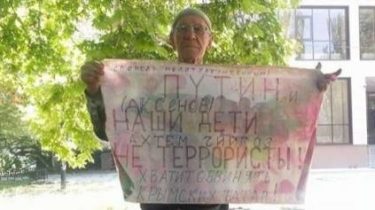 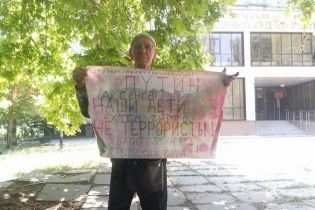 Lawyer Emil Kurbedinov and human rights activist Lily Gemedzhi appealed to the Railway “court” of Simferopol, in which they appealed the arrest of the 76-year-old Servers Karamatova with Parkinson’s disease.

It is reported Crime.

Video settings Crimea detained the pensioner, who came to court with the poster “Putin, our children are not terrorists”

As previously reported, on August 8, during a single picket in support of arrested leader of the Crimean Tatar national movement Akhtem chigusa near the Supreme court building occupied Crimea in Simferopol have detained an activist of Servers Karamatova. Against 76-year-old Crimean Tatar drew up administrative Protocol – “violation of order of carrying out of pickets” and “resisting police officers”. Subsequently, the illegitimate court of the occupied Peninsula awarded the patient Parkinson the man to 10 days in jail.