In the occupied Crimea has intensified repression against the Crimean Tatars 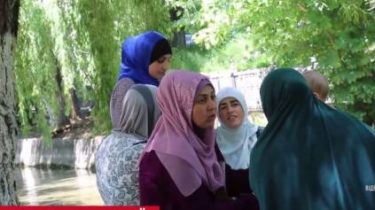 Only in the last two days in the occupied Crimea held a number of political repressions. More than six years in prison received a “saboteur” Redvan Suleymanov, Imam’s house was searched, and seriously ill 76-year-old man received ten days in jail for picket, according to a story TSN.19:30.

Suleymanov was sentenced for having allegedly had a task from the Ukrainian military find at the train station and airport of Simferopol places to lay explosives. The guy lived in Ukraine and in the Crimea came to visit relatives – and became another victim of the FSB, which is almost weekly reports about the exposure of the mythical saboteurs on the Peninsula. Trials and investigations against suspects turn into outright farce.

Video settings Crimea, the power of the occupiers organized repression of Muslims

The verdict Suleymanov responded to the Ukrainian foreign Ministry, calling it another attempt to break the Crimean Tatar people. Not less absurd the verdict was Server Karamatov. Ten days of arrest he was sentenced for having allegedly resisted the police, who detained him for a single picket at the court where hear the case Akhtem chigusa. Karamatov held a banner reading “Putin! Our children are not terrorists!”. Crimean activists note that Karamatov suffers from Parkinson’s disease and not very good control of their movements. Police described this as an attempt grandfather to beat them.

The Ukrainian Prosecutor’s office of Crimea has opened proceedings against illegal actions of the Russian police and Simferopol judge Marina Kalatsey, which put Karamatova behind bars. And in the village Novoklenove Belogorsky district of the Crimea occupants after a search have detained four men from a Muslim family. The reason is unknown. The relatives of the detainees are afraid to talk. But in their defense, made by the neighbors. “With a search warrant raided the family. To people who adhere to their faith. Turned the house upside down. This is a very good family. Patient, hardworking, kind. Lived here for about five years. And all the time in work. The building, the land, the greenhouses put. Grow tomatoes and cucumbers, and for the money to feed the children. Why to such a family to break? Muzzled our nation” – outraged indigenous Crimeans.