The defense Ministry has fined providers of low quality products for the military, nearly 3 million 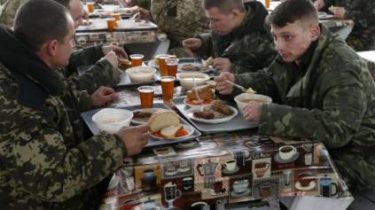 Suppliers of poor-quality food for the Ukrainian military fined a total of over 2.8 million UAH.

This was announced by the head of development and support of the material support of the armed forces, Colonel Dmitry Marchenko, reports the Ministry of defence of Ukraine.

Video settings the canned goods that supply to the military units of the Ministry of defense, put everything except the meat

Dmitry Marchenko noted that the results of the checks submitted 44 claims for which the suppliers supply was billed penalties totaling over 2.8 million UAH.

Poltorak said that the Ukrainian military will begin to feed anew

The defense Ministry assured that ready together with volunteers, media and public figures to control the quality of food supply servicemen of the armed forces of Ukraine. The office also recalled that “hot line”, the number of which is accommodated in the dining room, where they feed the soldiers.

Earlier it was reported that in the stew, which fed the Ukrainian military, has everything except meat. Loud criticism of the defence Ministry announced deputies, volunteers and soldiers of the 128th mountain-infantry brigade. They organized an independent examination of the two types of canned food, the results of which showed that the only product of animal origin in these banks – the giblets.