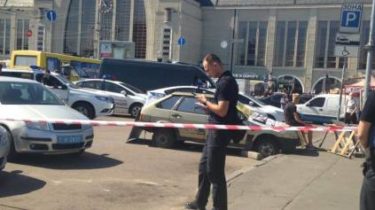 Among white day at the railway station of Kiev unknown persons opened fire from a traumatic weapons and wounded three men. Eyewitnesses say that the attackers ran up to one of the minibuses, and shot the men and fled, according to a story TSN.19:30.

Frightened witnesses called the police. Who was shooting – I don’t know. “Shot very much. And here, below, and beyond. Who shot – I don’t know,” says one of the women. All the injured, the witnesses, occurred in the thigh. The first version of events – the conflict carriers.

Videocassette in broad daylight opened fire on the capital station

In the company bus which stood near the site of the shooting, confirmed that it affected their employees. However, they work only a week, added there. And I assure you that it is legal. “We officially work. They decided to remove the competition. A matter of money. They decided therefore to intimidate” – suggests the administrator of the carrier Vitaly.

Near the hospital there is a wife with colleagues one of the victims, they avoid reviews. The surgeon says that it delivered only one of the three victims – the hardest. Other prisoners were taken to other hospitals. A 36-year-old man has had surgery. “Four gunshot wounds: one in the lumbar region on the right forearm and two in the right thigh. Will live”, – assured the duty of the responsible surgeon of hospital No. 17 Vladimir Gulag.