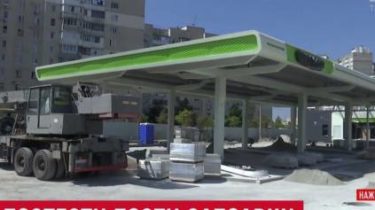 Residents of ten high-rise buildings of the capital the second day we spend the night on the road in a residential area of Kiev. Thus they are protesting against the construction of gas stations under their Windows, according to a story TSN.19:30.

From high risk to the nearest house of the people counted not more than 38 metres and 10 metres from public transport. The initiative group filed a lawsuit on the developer, and the Kiev government issued an order on cessation of work. However, construction continues at a record pace.

More people in the picket becomes after work, go catch up with all the new people. They have already laid out several rows of car tyres, have pitched tents and are already distributed duty for the night. Residents Poznyakov say that he learned about the construction of filling stations, only when the night large pits steel shipping tanks for fuel. Activists have sued the city government, which voted for the secession of the land, and the state construction Inspectorate, which agreed on threat construction. The protest was declared indefinite.

The land plot allocated for the construction of an open Parking lot, but the developer changed purpose and has started to build a gas station. The Kiev government is ready to terminate the lease in these violations, because the order on suspension of construction is not carried out – work the fence is underway, the technician brings up all new and new materials. The facade can be seen that the gas station belongs to a network of OKKO. They said that is not a developer, and all work is performed by OOO “Park Guell”. This firm owns the facility and the land, which PJSC “Concern Galnaftogaz” (“OKKO”) plans to redeem in the future, but only subject to the completion and commissioning of filling stations in operation – in full compliance with all laws and regulations in force in Ukraine.

In Kiev, near the metro station “Forest”, the protesters blocked the road: the collision happened

Soon the hearing about the construction will take place on 28 September. Residents fear that by the time the gas station not only to build, but will start to work.

As previously reported, from the beginning of movement of buses of routes №№ 17, 18, at the intersection of str – str. Akhmatova – str. Trostyanetskaya, continues the protest against the construction of a petrol station. Through this work of buses was organized along the route: metro Kharkov – str – str. Anna Akhmatova – str. Trostyanetskaya – str. Revutsky – metro Kharkov.