Looked, cooked, sang, neighbors told about квартирантt that killed two women and jumped out the window in Kiev 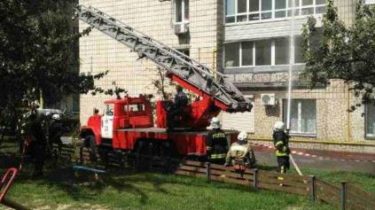 In the capital, a man jumped from the seventh floor, and before that killed two women and set fire to the apartment. According to witnesses, the 57-year-old lodger, the landlady tried to evict, and called for help daughter-in-law, says the story TSN.19:30.

Women trying to convince the man to pack up and leave, so son-in-law asked to be on the street. The conversation did not work – two women and a tenant died. “For fifteen minutes upon arrival, they saw that jumped out of the window man. They do not have time to do something for fifteen minutes,” says the speaker of the SSES in Kiev Svetlana Vodolaga.

Video settings Kiev, a man killed two women, set fire to the apartment and jumped from the seventh floor

The man died immediately, in the burnt-out apartment rescuers found two bodies – the landlady and her daughter. Both women had a fractured skull. According to neighbors, a man about three years lived in this apartment. “There lived a grandmother who took him in, so he looked after her, cooked, and sang sometimes. He sang well, as they say neighbours in the ear not pressed”, – said one of the occupants of the house.

Killing women, tenant barricaded himself and tried to conceal the crime by setting fire to the house. In the end, jumped out the window. The identity of the suicide investigators establish the National police.