Forest billions: all Ukrainian trees can give a concession 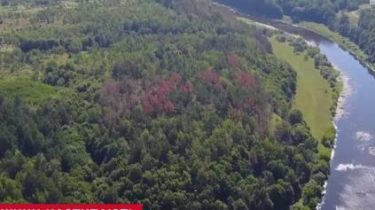 The area of forest fires in Ukraine has increased tenfold, and the number of frames of forest guards has decreased in direct proportion. Foresters of the East and South have forgotten to write to the program of expenditure of the state budget, so now his salary forced to convert them to the foresters of the West and center of Ukraine, says the story TSN.19:30.

Leonid prokopuk charge Fastovsky forest 35 years and during that time he was given a salary only wife. But a year and a half forced to share with colleagues, because they do not get paid when they formed the state budget, forgot about them. “It’s somewhere 800-900 hryvnia. I already 2800 somewhere gave,” he says.

Foresters of nikolayevshchina, Kherson region, Odessa region and other regions have repeatedly appealed for money to the Verkhovna Rada and to the Cabinet, and reached to the President – but there on the salary others are not reset, only helps the forest brotherhood. “The management of forest and hunting economy with the beginning of the year we have recalculated of the three areas over 5 million is assistance”, – said the head of the Dnepropetrovsk regional management of forest and hunting economy Valery Velichko.

To TSN got the so – called order- table, who of the profitable forestry enterprises and how much should be allocated to support poor regions. We are talking about tens of millions of informal hryvnia. The state forest Agency agree that this assistance is there, but saying that it is not forced, but voluntary. “The state forestry Agency does not send binding messages. This is nonsense. This is not a letter – there is no signature hats,” says the Deputy head of Department Vladimir Bondar.