A terrible accident in Kiev: a pedestrian after hitting one car was thrown under the wheels of the other 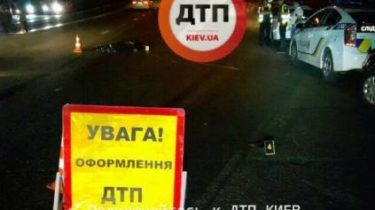 In Kiev at the Lobanovsky Avenue in the night of 12 August there was a terrible accident, which resulted in the death of a pedestrian.

It is reported by the community Dtp.kiev.ua.

The car “Peugeot” under the control of the driver in the traveling direction of the bus and knocked down a pedestrian-offender. From blow the victim flying in the air for about 20 meters and fell under the wheels of the Chevrolet, which was traveling in the opposite lane.

The death of a pedestrian came instantly. At the scene police work.

In Khmelnytsky region in the accident killed the young couple

In the “Volkswagen Caddy”, the driver was killed. In the vehicle were four passengers: a woman driver and three grandchildren. From the received traumas the woman died at the hospital. Only five people died.

Two children were hospitalized in the intensive care unit and another in the casualty Department Sarny Central rayon hospital.

Fatal accident in Kyiv at Lobanovsky: the pedestrian died under the wheels of the Peugeot and Chevrolet: the girl on Peugeot driving down to the…