In “Ukrzaliznytsia” said that most passenger cars are not air-conditioned 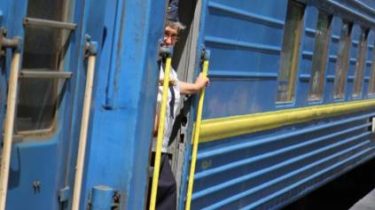 62% of passenger cars not equipped with air conditioning systems.

About it reports on Saturday a press-service “Ukrzaliznytsi”, stressing that, despite the abnormal heat, possible discomfort during the trip.

The Department urged passengers to avoid prolonged exposure to the sun before you travel, in the presence of chronic diseases to have their usual medications recommended by your doctor, drink plenty of water, and in the case of ill health immediately contact the conductors.

In addition, in the “Ukrzaliznytsia” has warned about possible delays to passenger trains due to the use of the speed limit due to overheating of ways. Since the beginning of August it was employed about 350 such restrictions.

Videocomplete and reform: outcome of the work of Wojciech Balczun Director of “Ukrzaliznytsia”

Objective reason for such a situation with a passenger rolling stock the Ministry called the failure to comply with article 10 of the Law “On railway transport”, according to which the construction and reconstruction of railway lines, of objects of mobilization appointment, acquisition of railway rolling stock for transportations of passengers in long-distance trains and local traffic shall be carried out in the prescribed manner at the expense of the state budget.

During the period of independence of Ukraine from the state budget funds to upgrade the rolling stock is not allocated, said “Ukrzaliznytsia”.

“Over the past 25 years purchased 583 cars – all with their own funds of Ukrzaliznytsia. The updating of the Park began with the end of last year and continues today. This year PJSC “Ukrzaliznytsia” will update the fleet of passenger cars on 203 units. Of them will purchase 50 new cars and 153 units – upgraded capitally-regenerative repair. All upgraded and purchased cars have already been equipped with air-conditioning systems”, – stated in the message.

The press service added that he planned to maintain momentum for the renewal of passenger rolling stock in the next few years – 250-300 cars per year.

We will remind, earlier the Minister of infrastructure Vladimir Omelian suddenly rode in second-class ordinary train from Kiev to the Dnieper. “The cars looked. After repair, clean. Of the minuses – wet lingerie and unbearable stuffiness in the beginning of the journey. But then the air conditioning worked, half of the toilets – even the vacuum. It is a pity that history, as we will be serving on the platform of refrigerated cars in the summer and warm in winter, and remain fairy tales”, – said the Minister, adding that the station is a mess, which is “reminiscent of early Shanghai, not Europe or even Poland.”