Chronicle of the ATO. Militants killed a gas pipe and nearly “flew” in the air house 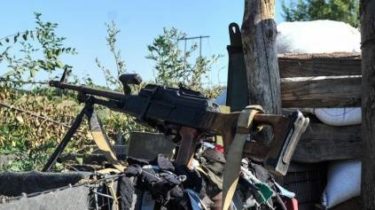 Militants continue shelling Ukrainian military positions and settlements in the ATO zone in the Donbas. Saturday, August 12, was no injured and victims. Although he could burn the house – fighters got into a gas pipe.

“Today, criminals, ignoring all norms of international humanitarian law once again endangered the life and health of the civilian population. Around 5:30 during the shelling of our positions near the village of Novoluganskoe, near Svetlodarsk, under fire from militants hit residential areas. As a result of fire from APCS, heavy machine antitank grenade launchers and small arms in one residential building was damaged gas pipe and the resistance power lines, broken glass, isecheno the pieces of the wall, fence and car. Only narrowly in the house there was a fire in the fire gas that flowed from the damaged pipe. Fortunately, anybody from tenants has not suffered”, – said the press center of staff ATO.

Traditionally, militants shelled positions of Ukrainian troops in the night.

“About midnight, militants fired 15 min of caliber of 120 millimeters on the Ukrainian fortifications near the Crimean that on Lugansk the direction. In Primorye, the enemy used grenade launchers and 82-millimeter mortar near Pavlopol. And in Donetsk direction criminals from heavy mortar, grenade and small arms fired at our strong point in the vicinity of Nevel. All attempts to force the Ukrainian units of the long-standing confrontation between ATO forces harshly suppressed sighting retaliatory fire,” – said the press center of staff ATO.

Recall that over the past day in the Donbas killed one Ukrainian soldier, another nine injured.