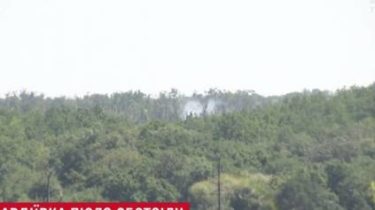 Fighters who protect the town, recovered from the shelling, which on the eve of killed one soldier and two others were injured. More than six hours , the militants fired on the perimeter of the frontline town, said in the story TSN.19:30.

After the battle on the front line appeared a new problem – air. In the windless heat and after the fire, a war, almost can not breathe. In some places the trenches are still visible as steaming ground. “Wet wipes and a mask” – shares his recipe for salvation the fighter with the Callsign “said”. His stance, the militants covered with armor-piercing incendiary shells, the gaps which were formed by fires in the parched grass. The military believes that the enemy had to burn a landing above the position of the APU to expose her.

All day some men brought water, others extinguished the fire. “It was hard to extinguish, get out in pairs, so if one hurts the other pulled,” says the soldier Alexander. The militants continued to fire, until the soldiers fought with fire – fired from grenade launchers and mortars. The soldiers are saying that the shells went fairly close together. In italialaisia military could not resist and gave the answer, covering fire the efforts of the twin cities.

Callsign “bones” admits that getting tired of the constant explosions and shooting. In his native village in the Kyiv region his waiting family and the peaceful profession of a blacksmith, so he wants to go home, but the man has no plans to return. “First you out all the scum knock – out of the country. And then stop thinking about it, about the peace”, – he explained.