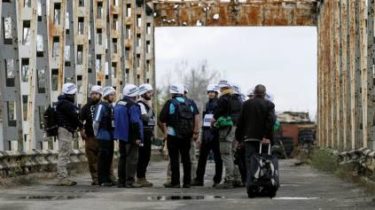 On the bridge in the Village of Lugansk an armed man threatened to shoot the OSCE observers.

About it reports a press-service of the mission.

Sunday, August 13, at 9.45 patrol of the OSCE mission of four was South of the broken part of the pedestrian bridge South of the Village of Lugansk, which is under the control of the government, near the advanced position of the militants “LNB”. The observers were inside the wiring.

Observers monitored as civilian populations crosses wooden ramps. They were approached by the naked man in military uniform and began speaking to the SMM. Observers could not fully understand him because he spoke in broken Russian with a strong accent. The OSCE has suggested that he is from the North Caucasus.

Then the man departed from the patrol for two minutes, then returned with an assault rifle. He established a store of rifles, unplugged the fuse and sent on patrol around the distance of 3 meters. Also present were two unarmed men in military clothing.

The man with the rifle ordered the patrol to go away, speaking loudly in Russian: “You’re all spies. Anything you go near our positions. You generally have nothing to do here. Get out of here. Count to three and if you don’t go, or I’ll shoot”.

When an armed man began to count, the leader of the patrol said that the observers go away. Members of the patrol returned to their cars and left the area.

The OSCE was informed by the Joint center for control and coordination of the incident and asked him to investigate.