On the Dnieper river formed a huge field of water chestnut, which does not breed fish 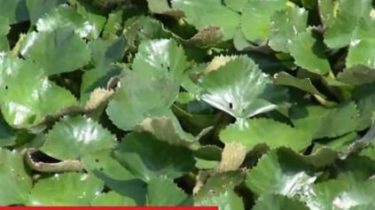 The Dnieper and the fish stocks of the country is under threat because of a plant called water chestnut. It is listed in the Red book of Ukraine, but the environmentalists and the fishermen plead with her to withdraw from there. Because the plant simply filled the shallow waters of the Dnieper, and that there does not breed fish.

Volumes of plantations to grow each year. But officials from the Ministry of environment can not agree with the scientists, so that they were no longer considered a rare plant. This is stated in the program TSN.19:30.

In the upper reaches of the Kiev reservoir in the distance are visible the whole field of water chestnut. To the Bush on the river surface TSN gets on a fishing boat. Under the bushes – thousands of hectares of dead water, because there were not penetrated by sunlight, there rarely comes a fish. Water chestnut solid layer covers the surface of the Dnieper, and its root reaches up to three meters.

Apart from the fishermen, his disaster called environmentalists. According to official data, since Kiev reservoir every year the country loses 400 tons of fish. After all, the nut was covered for 5% of its surface. Annually these data are growing.

In the Ministry say that the water chestnut should be excluded from the red book. And for that to happen, by law, need research. About them, officials say, they are asking for more than one year at the Institute of botany. But scientists don’t even begin. The Institute said that no one asked: “Any paper”.

Botanists say they are against the extraction of the nut from the book. Indeed, among the 9 types 7 – really rare. But they are all written as one. And clutter the Dnieper, the two are not uncommon. Their Commission has allegedly allowed to remove from the red book. The Ministry of environment remains to approve the resolution. The Ministry on the resolution hear for the first time. And I hope to persuade scientists to remove all nuts from the endangered list at the next Commission meeting in September.

For more details, see the story of Tatiana Fruit.