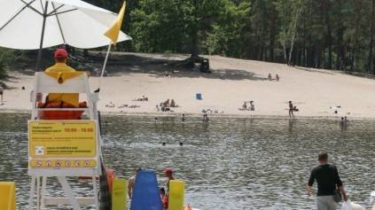 To bathe or not to bathe – no question. None of the Metropolitan beaches is not safe. Due to the insane heat levels of E. coli in the water exceeds all standards. Why doctors do not recommend to relax in the water.

Several times during the hour beach patrol Eugene on the beach “Venice” along with fellow rescuers informs tourists about the threat in the water. The guy admits that the recommendations patrol to refrain from swimming adhere to the unit. The rest is limited to the question, why not actually.

Now this beach posted yellow flag – swimming is not recommended. Red means that swimming is forbidden and green is safe. These levels of security, depending on the state of water, sets Andrei Logvinenko. Water samples for harmful bacteria his colleagues “Plyos” are doing every week. Today Andrew advises not to bathe because the water found E. coli.

Videoamatoriali reported on what the beaches of the capital can swim

“The results we received showed that there is excess of norm of harmful substances in water and so it is advisable to refrain from swimming. If a yellow flag, it means that this indicator is not critical, but exceeded and approaching a critical”, – said Andrei Logvinenko.

The water condition is constantly changing and tomorrow a red or yellow flags can change to green.

More details see in the story of Ivan Vorobyov.