“The protest of the elders”: the protesters in Crimea are determined to continue the struggle against the occupation authorities 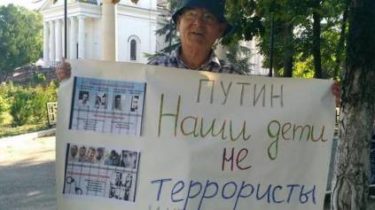 Nine of the detainees were the result of protests in occupied Simferopol. Crimean Tatars in the respectable years left on pickets demanding the release of 76-year-old Servers Karamatov, who last week was arrested for 10 days during the same protest, according to a story TSN.19:30.

In social networks Crimeans call today pickets “protest of the elders” or “share grandfathers”. The absurd verdict a seriously ill pensioner and the court of appeal’s failure to issue Karamatova outraged Crimean Tatar community – support included other elders with posters of the same content, what kept grandpa: “Putin! Our children are not terrorists!” To this label have added the requirement: “Freedom Karamatova”! “I have come here to Express their dissatisfaction, distrust of the government and to support your brother Server, who was recently jailed for what he came out with this poster”, – said one of the protesters.

Pickets pensioners lasted about an hour. All of them, and along with those activists who was just there, detained the police occupation. Most of a few hours released, but the fate of several of the detained activists are still unknown. On Arukula Davlatova up a Protocol for an unauthorized rally, it will be judged Train “court” which sentenced Karamatova. This institution has been dubbed the “grandfather’s court.” Other pensioners, protesters, lawyers and human rights activists managed to release. Grandfather left the station tuned to a new protest. “When he left, he said: return the poster, will go again. What can you do, that time has come,” – said one of the activists. “Revolutionaries are not old,” added the lawyer.

Meanwhile, in Old Crimea, in his native town Servers Karamatova, neighbors-the Crimean people are outraged by the imprisonment of the pensioner and the overall arbitrariness of the occupation authorities against the Crimean Tatars. “They want to intimidate us. Old bully young people. But they will not succeed. Great experience our people have in the struggle for their rights,” say the indigenous inhabitants of the occupied Russians of the Peninsula.