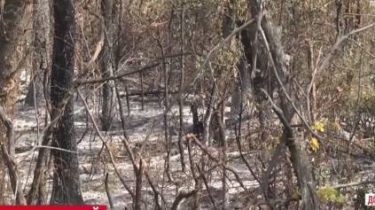 Solid ashes from burnt trees and scorched grass now looks the farthest position of the Ukrainian army under the plant with the name “eagle”. There are already several days, the enemy launches hundreds of incendiary weapons, according to a story TSN.19:30.

“Lit scrim, lit up my armor”, – tells about the latest developments one of the soldiers. Extinguish fires local advocates for the third day. “We had water reserves are large enough – thanks to this. A bit of earth. Spilled 100-200 gallons of water, gradually extinguished,” say the soldiers on the front line.

Night attack, the militants, as usual, start small caliber and then in the course are mortars. Solid explosive shower starts at 18:00 hours and continues until sunrise the next day. “Here this truce never smelled” – recognized defenders of the Town. The military said they have to wait, but when the provocation of the enemy become unbearable, contact headquarters and get permission to return fire.