Shabunina threatens till 5 years of imprisonment for beating blogger 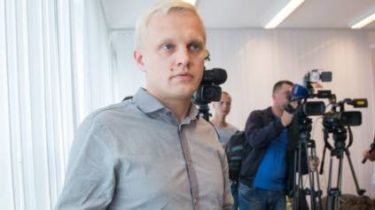 The head of the Center of counteraction of corruption Vitaly Shabunin going to give a suspicion of “intentional bodily harm of medium gravity” blogger Filimonenko near the military enlistment office, where antikorruptsionera came to know why he had received the summons, although it is unfit for service.

This is with reference to the investigator, who is investigating the case, reports “Center of counteraction of corruption”.

As noted, tomorrow Dnieper branch of national police will be handing the suspect and then the court will elect a measure of restraint for Shabunina – personal commitment or arrest.

“Shebunino is charged with part 2 of article 345-1 – “threat or violence concerning the journalist”, namely: “the intentional infliction journalist […] the average weight of injuries in connection with the implementation of this journalist’s lawful professional activities”. The Chairman of GIC is threatened by restriction or imprisonment for the term up to five years”, – explained the press service, adding that he called the case against Shabunina a political order that aims to defuse public figure and anticorruption activist.

According to CPC, at the presentation of the suspicion insists, in particular, the procedural head on the case – the Prosecutor Dmitry O. Rusnak.

“The investigation has not been elucidated two key things: why all of a sudden investigators believe the provocateur – journalist, and, in fact, where did the “average severity” injuries”, – said the lawyer of the Center of counteraction of corruption Elena Serban, who also assured that after hitting Shabunina Filimonenko he called himself an ambulance and refused hospitalization and medical help, which was recorded on video.

The CPC also said that a few hours after hitting Filimonenko there was no sign of “heavy damage”, but they “came later, when he along with his accomplices left the scene”.

The Center believes that Filimonenko was beaten by his accomplices in order to obtain different degrees of severity, for which there is greater responsibility – 5 years in prison.

“In addition, Filimonenko alone has not provided the result of medical documents. Investigators had to obtain through the courts. Filimonenko even one day was not hospitalized to Kyiv city emergency hospital, which should be delivered by law, and 21 days were cured in Kyiv city clinical hospital №12, where constantly post videos. Such period of hospitalization is needed for that doctors qualified the injuries as “severe”. After the “treatment” Filimonenko fled the country abroad with the purpose of avoiding criminal responsibility, as publicly announced on his Facebook page,” – said Serban.

We will remind, the head of the Center of counteraction of corruption was given a summons three soldiers, accompanied by guys with a camera. At the same time said assured that he is unfit for service for health reasons, and call the recruiting office has organized one of the officials. After that, antikorruptsionera came to the Dnieper in the Kiev military registration and enlistment office to find out why he received a summons. Near the building he had a verbal altercation with an activist blogger from Luhansk region by Vsevolod Filimonenko, who subsequently sprinkled Shebunino in the face from a gas spray.