Tymoshenko removed the controversial post about the missile engines, the DPRK 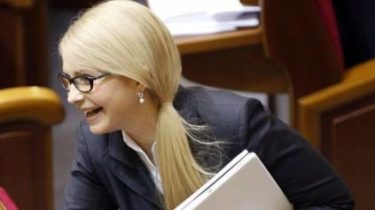 The leader of the party “Batkivshchyna” Yulia Tymoshenko was removed from your page post about a controversial article in The New York Times that the successful launch of ballistic missiles by the DPRK could contribute to Ukrainian engines.

The people’s choice stated that in case of confirmation of this information, the Ukraine may fall under the sanctions and stay without the aid of the “civilized world”.

“This situation is a direct result of the incompetence and criminality of the President of Petro Poroshenko and Prime Minister Vladimir Groisman. This government is destroying the country”, – was written in the post Tymoshenko. 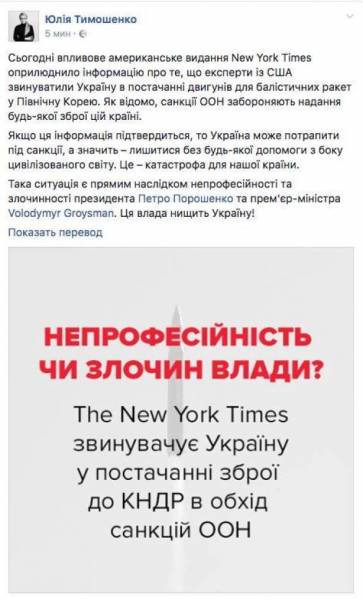 Her words picked up by Russian media – RIA Novosti, Moskovsky Komsomolets, Lenta and others.

Later the post disappeared from the page of Tymoshenko, the press service of “Batkivshchyna” reported that the website of the political forces used for provocation.

“On the official website of the party “the Fatherland” was not released no positions of our team concerning the publication in the newspaper New York Times. This provocation once again proves that there is no limit to the technologies used against the “homeland” our opponents”, – stated in the message.

The text says that Ukraine and the Ukrainian state enterprise categorically could not put the DPRK military goods in contravention of international sanctions.

The Ukrainian company “Pivdenmash” said a New York Times article is provocative and added that the facts presented in the publication are untrue. In particular, “Yuzhmash” is not a major producer of missiles for the Russian Federation and do not deliver to Russia or missiles or their parts and Assembly units, including rocket engines, and has no relation to missile programs of the DPRK.

Expert Michael Elman, on the basis of the words of which were written in the article stressed that does not believe that the Ukrainian authorities knew or contributed to the fact that the engines come from Ukraine.