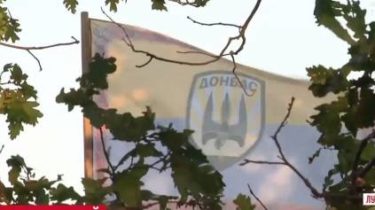 The flag has a non-existent battalion “Donbass” is now fluttering in the fields of Lugansk region. There, the defense kept the men who composed the units have been “ilovaisky boiler”, Debaltsevo and Shirokino, and after the captivity and wounds, they gathered a company of volunteers and returned to the front in the composition of the Armed forces, says the story TSN.19:30.

The habit to hold each other, they are not lost. Each evening the sun sets, the commanders go in order to check whether enough guys ammunition, ammunition and water. On the base of the soldiers speak only in a whisper. “Separ are over 40 meters”, – explained the military. The enemy they see and hear neighbors fighting every day. “They come out, begin to pour – well, guys give, of course, counter strike. These are all the damn truce – if it were not for these truces, we would have all the houses were,” say the soldiers.

Videoroliki in the direction of Lugansk adhered to the unexpected silence

The saboteurs insurgents came very close. “The Lieutenant took the fight three hundred went to the hospital,” recognized fighters. The officer had nothing to fear – he is on the mend. Losses in the battle were fighters, but the commander is not reassuring. “Mine were eyes – how to fight well, and DRG have them, and weapons in the mines patched” – ironically he asks.

At dusk the enemy begins firing from machine guns and grenade launchers, flying toward the soldiers and a few min. But at midnight it all goes silent, the silence lasts until the morning. “Their salary was. Maybe they’re celebrating something more important than the protection of the young Republic”, jokes the fighter with the Callsign “Gnom”. Meanwhile, Ukrainian soldiers after a quiet night a bit, drink coffee and do exercise.