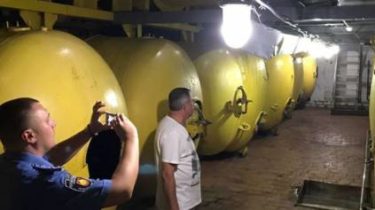 More than 300 employees of tax police carry out searches in the factories-producers of alcohol in 15 regions of Ukraine. Searches are carried out in the framework of the second stage of the struggle against the shadow market of alcohol and alcohol.

About this on his page in Facebook said the first Deputy Chairman of the State fiscal service Sergei Bilan.

The basis for the searches were the results of the analysis of a criminogenic situation in the sphere of production and turnover of alcoholic beverages. The tax authorities want to check the information about the unaccounted-for production of alcohol legal plants.

Sergey Bilan noted that employees of tax police many times seized from illicit trafficking a vodka label and under the labels of well known Ukrainian producers.

“Thus, the searches in distilleries, there is the issue of the causes and not the consequences of illegal traffic of alcoholic beverages”, – said the first Deputy Chairman of the SFS.

Searches in the factories – this is the second phase of a large-scale security operation to combat the underground market of alcohol and alcohol. In the first phase, which took place in late July, the distilleries were seized and subsequently by the court seized on 864,5 million liters of alcohol-containing substances worth nearly 180 million.

Continue large-scale and systematic work on combating the black market of alcohol and alcohol. In the first phase of special op…