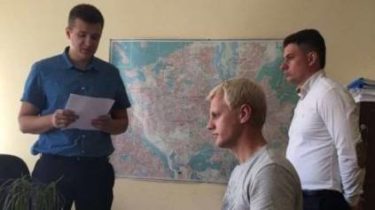 In Kiev in the Dnieper police Department, head of the Center of counteraction of corruption Vitaly Shabunin announced the suspicion of bodily injury of average gravity to the blogger Filimonenko near the military enlistment office, where antikorruptsionera came to know why he had received the summons, although it is unfit for service.

It is reported by GPK on his page in Facebook.

As noted in the document, 8 June 2017 of the Dnieper river in Kiev military said struck a single blow to the face Filimonenko that “entailed long frustration of health of the latter in the form of closed injuries of the face”.

In turn, the Center called the case against Shabunina a political order that aims to defuse public figure and anticorruption activist.

We will remind, the head of the Center of counteraction of corruption was given a summons three soldiers, accompanied by guys with a camera. However, the Shabunin assured that he is unfit for service for health reasons, and call the recruiting office has organized one of the officials. After that, antikorruptsionera came to the Dnieper in the Kiev military registration and enlistment office to find out why he received a summons. Near the building he had a verbal altercation with an activist blogger from Luhansk region by Vsevolod Filimonenko, who subsequently sprinkled Shebunino in the face from a gas spray.