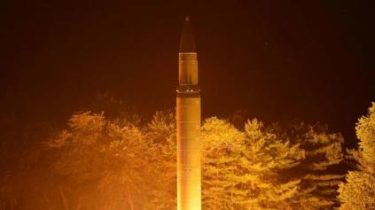 Michael Ellemann, the author of a controversial report on the engines in the DPRK, said he was not sure that the source of technology for North Korea is Ukraine. However, he denied his participation in the Russian provocation to discredit Ukraine, what it has accused the NSDC Secretary Oleksandr Turchynov.

About this expert said in an interview with voice of America.

“I am not in contact with any Russians. I’m not a fan of Putin. I have sympathy for Ukraine, and I sympathize with her because of the annexation of Crimea. I do not participate in the agitation, propaganda, who are sponsoring the Russians. I don’t think The New York Times involved in something like that. If you read what I wrote, I expressed very clearly – we are not sure that Ukraine is a source of technology. This can be Russia”, – he said.

In his report, Michael Ellemann said that the engines for the North Korean missiles could come from Ukraine or Russia, but, in his opinion, “based on what I know, but a lot remains unknown to me – more likely that the technology came from Ukraine than from Russia.”

If he did not believe the government of Ukraine involved in the possible supply of engines to North Korea.

“I suspect that they were obtained through illicit channels. I do not think that the governments of Russia or Ukraine would take part in it. Both governments have a good reputation in the issue of preventing the proliferation of sensitive technologies. In particular, the government of Ukraine was arrested in 2012-m to year several citizens of North Korea who were interested in the technologies that were in the KB “South”, Michael said Ellemann.

“I certainly believe that the government did not take part in it and most likely it happened because of illicit networks of arms dealers, criminal gangs and others,” he added.

Ellemann during his research came to the conclusion that, most likely, in the supply of engines attended one of the “Yuzhmash.”

“CB “South” is in a difficult economic situation, so there is probably some employees, dissatisfied with their situation. The same security guards at the plant. This does not mean that I am someone indicate exactly. The point is that there is an almost infinite set of options, if you count people who knew about the availability of these technologies in the KB “South”, – said the expert.

Rocket parallel. Experts explained the similarity of the scandal with “Kolchuga” missile engines for the DPRK

Ellemann also suggested that “it could be kidnapping, burglary, which was not noticed by the guard”, we are talking about items that have not been used for over 10 years.