The court released Shabunina under the personal obligation 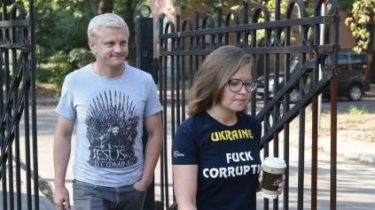 Dniprovskiy district court of Kiev appointed head of the Center of counteraction of corruption Vitaly Shabuninasuspected of causing bodily harm to a blogger Vsevolod Filimonenko, a measure of restraint in the form of personal commitments for a period of two months.

The corresponding decree was read out by judge Andrew smoked.

As noted, the use of personal commitments antikorruptsionera petitioned the investigator.

We will remind, earlier the head of the Center of counteraction of corruption was given a summons three soldiers, accompanied by guys with a camera. However, the Shabunin assured that he is unfit for service for health reasons, and call the recruiting office has organized one of the officials. After that, antikorruptsionera came to the Dnieper in the Kiev military registration and enlistment office to find out why he received a summons. Near the building he had a verbal altercation with an activist blogger from Luhansk region by Vsevolod Filimonenko, who subsequently sprinkled Shebunino in the face from a gas spray.

On the eve of 15 August, the Centre reported that Shebunino is charged with part 2 of article 345-1 – “threat or violence concerning the journalist”. For such action in the case of proof of guilt threatened with punishment till 5 years of imprisonment. However, today, August 16, suspected Shabunina declared under article 122 of the Criminal code “Intentional moderate bodily injury”, the maximum penalty for which is up to three years of restriction of freedom. As explained in the Prosecutor’s office, police checked, involved Filimonenko to journalistic activities.