The fire on South bridge called the machine foreign numbers 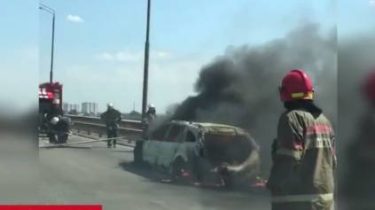 In the capital on the South bridge after lunch, lit up the car with foreign license plates. The drivers called the fire Department, says the story TSN.19:30.

Rescuers extinguished in just a few minutes. The owner of the car, according to witnesses, took the charred room and fled the scene. The cause of the fire machine is not installed, but in the trunk of a car found the gas installation.

At the scene arrived firemen and journalists, but the patrol never showed up. For lack of license plates and the driver to establish the identity of the owner is impossible. Meanwhile, in the direction of Borispol were formed many kilometers of traffic jam.