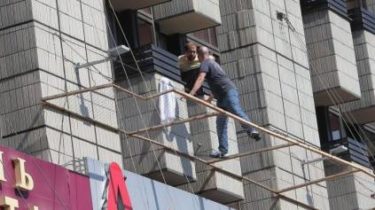 The man at the center of the capital was threatening to jump from the hotel “Khreshchatyk”, decided not to do it

In particular, around 14:15 “the suicide” I climbed the wall to the balcony, where he is at the moment. Communicate with him staff.

The police from the scene left was to watch only the carriage of an emergency.

In turn Еспресо.TV reports that the man called Timur Kirillova and said that is a citizen of Canada and Ukraine. He demanded to speak with the Russian Consul, because I trusted him.

According to Kirillov, it can kill, it “hunts organized crime and no power is able to help him save his life.”