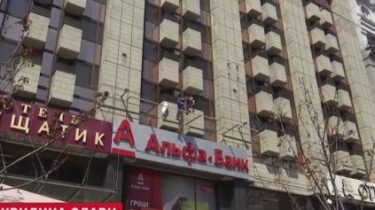 Four hours under the scorching sun at the height of the third floor held a man, which required the Russian Consul and threatened suicide. From the diplomatic mission for him, no one came, says the story TSN.19:30.

At 10:00 a.m. the man had to move out of the hotel, but instead went out the balcony to the grid and began to threaten to jump down. “Stand and a hundred pounds, mesh durable. Just his feet are in suspense, is a long time” – commented the course of events, the security guard of the hotel Victor Yakimenko. Potential suicide demanded of the Russian Consul, then journalists – but the police arrived, rescuers and an ambulance. Psychologists began negotiations, and the place under the balcony shielded with tape. “According to international standards, it is forbidden to use the grid in such cases, it is only necessary to persuade people,” – said the head of Department concerning emergency situations of the novel Tkachuk.

The ambulance prepared to take the patient to break even jumping from the third floor. Fractures just can not avoid. “And of the spine and extremities, and neck – depending on how you fall,” they say. Negotiators allow the man to drink, sometimes convey a cigarette, and to wipe sweat hung towel. The man sometimes talks to the press says that is a citizen of Ukraine and Canada, and his life threatened. “I tried to save my life for three weeks,” he says. Psychiatrists, who arrived on a call, remotely diagnose: the man is delusional, perhaps under the influence of alcohol or psychotropic substances. A terrible heat warms degree. “His behavior is motivated by nonsense”, – said Anatoly Tulchinsky.

Through four hours of “suicide” eventually got back to the hotel. The police claim to it have not. “Well, it’s bullying? I’m not a doctor. Maybe he took alcohol”, – says the head of the Shevchenkovsky police Department of Kiev, Herman of the Attack. On the balcony a man sat for another hour and finally came out to explain his action. “What happened today, it was the culmination of several years”, – said Timur Kirillov. According to him, in Donetsk his parents live. “Many media say that there are Russian troops. I don’t believe at all” – says “suicide”. And he adds that against him there is a mysterious conspiracy. “I am thinking about what will survive the night or not,” says the man. Who and why wants to kill him – Timur is not recognized, but his move happy. No police, no doctors, he in the end were not interesting.