At the airport “Borispol” build another runway 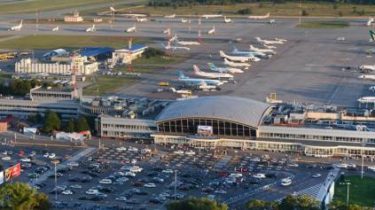 In the International airport “Borispol” have concluded that the passenger traffic is constantly growing. Trend will continue in the following years, so plan to build an additional runway for 8 billion until 2023.

This was told by Deputy General Director of the airport Yevhen Dykhne, UNIAN reports.

“Without precise calculations, we are unable to disclose the amount of the cost of construction of the runway, but we orientirueshsya 8 billion hryvnia. We’ll probably have to take out a loan, because your funds we are able to construct a facility for two of the construction season,” said Eliashberg.

“Today already understand the dynamics of passenger traffic at the airport “Borispol”. According to the development plan, the peak load on take-off and landing – up to 25 million passengers per year. The passenger traffic can be operated from a single runway. If the airport is to develop such a dynamic as it is now, within five years we will reach a peak of 25 million passengers per year. It is necessary to operate two runways,” said Director of the state design Institute “Ukraeroproekt” Cyril Novikov.

Recall, Boryspil airport in January-June of 2017 received 951,2 million UAH of net profit, which is 77.7% more than for the same period last year. The airport is a state enterprise, providing 55% of air transportation in Ukraine. The airport is the base for the largest national carrier – airline “Ukraine International airlines“.