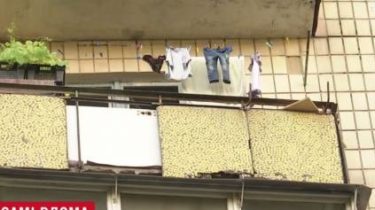 The inhabitants of one of houses of the capital had to call the police due to the fact that on the balcony of the seventh floor all day calling her mother the little boy. The police squad found in open flat a little boy aged a year and seven months and his 8-year-old uncle, said in the story TSN.19:30.

Neighbors noticed not as in crying and screaming, as the duration of these sounds. “Normally they’re not talking, constantly fighting and crying children,” people say. The unglazed balcony, big hole hastily earned the old doors. Neighbors say that the previous owner had finished their days falling from this very balcony. “Grandpa there, or fell, or threw it away. Three or four years no one lived there,” say the inhabitants of the house, who called law enforcement authorities.

Video settings Kiev, two hungry and dirty boys all day calling her mother from the balcony of the seventh floor

“Up to the seventh floor, the doors were opened, the Kids said mom went to work that morning until the present time has not returned. House spirits, everything is upside down, children are unkempt, dirty,” says police Lieutenant Vyacheslav Kharchenko. The younger boy Kirill went around the house without pants, senior Egor – with surfaced face. A few minutes before the arrival of the journalists returned to the mother’s younger and older sister. She closed the tattered, it is seen that repeatedly break the door. Chat 19-year-old woman spectacu not wanted, but through the door. said left his son and brother with her roommate. Then, in tears, told that the apartment I moved two months ago, the money for repairs there, together with his mother works as a saleswoman and with my dad no way to contact – he had no phone.

The woman says that are trying to expel the 22-year-old father of her child, but he drinks, fights and goes. Children say that they have at the boarding school of brother Vitya and abandoned one-bedroom apartment – much better than their previous housing. “In the garage. We did not wash the toilet did not go. I do to the bathroom do not go,” – said Yegor. Children the police left the house after promising themselves adult kids to stop. Now the family awaits the visit of the social services and must check the conditions and decide whether to live there children.