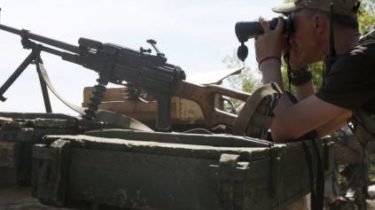 From midnight on August 18 was the most fervent in the direction of Donetsk. Four times militants from rocket-propelled grenades and small arms fired at the Ukrainian fortifications in the industrial area of Avdiivka. Additionally, under enemy fire twice been ATO forces near the village of zaytsevo and three times at the mine Butovka.

On Lugansk direction bandits in the next hour produced more than 60 min caliber 82 mm at a Ukrainian observation post near the Crimean. In response, the Ukrainian fighters shot away the enemy’s heavy fire from rocket-propelled grenades and heavy machine guns. In this result one Ukrainian soldier was wounded.

In Mariupol direction militants used mortars on the outskirts of Marinka. But around midnight gangs napril fire hit with 122-millimeter artillery South of Bogdanovka.

#Topod the Construction of the press center of the ATO headquarters as of 18: 00 on 18 August 2017 For the present day situation in…

“According to operational information on the temporarily occupied territories of Donbass the local are less willing to fight against the Ukrainian troops. To draw Shakhtar in the occupying army, from the Russian curators in the so-called local administration received an order about the production of citizens born in 2001 on the military records. In particular, from 28 August to 25 December, the leaders of the “administrations” should develop a plan and identify the organs of the so-called local government who are responsible for it”, – said the press center of staff ATO.