The shelling of houses in zaytsevo and one wounded soldier. A day in the area ATO 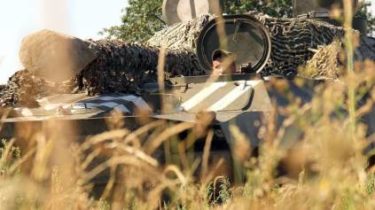 for the past day illegal armed groups 30 times violated the ceasefire on the Donbass. As a result of combat action one Ukrainian soldier was injured.

In the occupied part of Donbass blew up a truck with smuggled weapons. Summary of the ATO headquarters

On Donetsk the direction from 19 o’clock until nearly midnight, militants fired rocket-propelled grenades and heavy machine guns strongholds in Avdiivka the industrial zone. Also in the evening under their fire appeared and Ukrainian positions on the outskirts of Kamenka, Sands and Verhneuralskogo.

On Lugansk the direction terrorists from grenade launchers shot on Crimson and the Trinity. And about 22 hours the militants used mortars caliber 82 millimeters in the area of Novotoshkovskoye.

On the Mariupol direction near Starognatovki at the end of the day terrorists shelled strongholds with mortars and artillery of 152 mm caliber.

#Topod the Construction of the press center of staff ATO in 19.08.2017. The last day in the area ATO culminated in the intensification of Russian-…

Posted by the Press center of the ATO headquarters on Saturday, August 19, 2017

In addition, the militants of heavy machine guns fired at civilian homes in the village of Zaitseve. And about 19 hours from grenade launchers shot on Marinka.