In the center of Kiev a week will block roads. List of streets 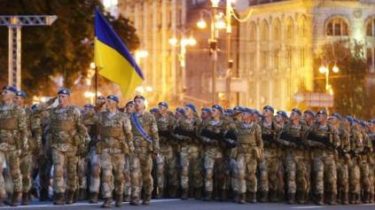 In Kiev from 22 to 28 August will be closed the Central streets for the celebration of national flag Day and Independence Day of Ukraine. This reports the press service of the KSCA.

Because of changes in the timing of the rehearsal schedule overlap traffic may also change. However, the city has published a list of streets that will not be take during the event.

To Kiev from the USA came the military band, which will participate in the parade for Independence Day

So, from 06:00 on 22 August to the end of the activities will be blocked traffic on several streets:

During the training of troops with the passage on foot from 21:00 on 22 August to 02:00 August 23 will be closed to traffic on the street (in the area of Bessarabia to the European area).

231 foreign military and “big surprise”. Biryukov told about the parade on Independence Day

Also from 24:00 on 22 August to 05:00 on August 23 will be closed to traffic on the following route: the Park of the military unit А0222 – street of Marshal Rybalko str Vyacheslav Chornovil – in the opposite lane to the left of the Vozduhoflotsky bridge – on the wrong side of Victory Boulevard to Victory square – Starovokzalna St. – Zhylyanska street – Bolshaya Vasilkovskaya – Leo Tolstoy square – Velyka Vasylkivska – str.

21:00 21 August to 06:00 on August 28 traffic on Khreschatyk street (from Maidan Nezalezhnosti up to European square) and partly in the European area is limited at the venue of demonstration of arms and military equipment of the Armed Forces of Ukraine, the State border service of Ukraine and the National guard of Ukraine.

We will remind, on August 24 will be held a military parade for Independence Day. Participation in this parade will take over 3,600 Ukrainian military. Also on the main street of Kiev for the first time, will the military units of the countries-partners have already confirmed their participation, the UK, Estonia and Latvia.