Why expensive meat: Ukrainians should prepare for even higher prices for chicken 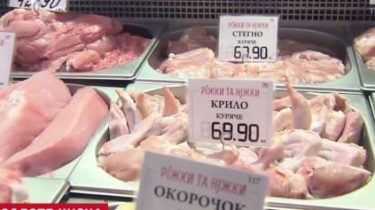 In Ukraine significantly increased the price of meat, primarily chicken. Manufacturers warn that this is not the limit, and the new price hike will take place very soon, says the story TSN.19:30.

New labels for meat in major supermarkets slowly but surely reached the average European level. The retail price for a chicken carcass now is 55 UAH, that is two dollars. “50 hryvnia, sorry, even wings, just the wings, there is nothing to eat. I can’t speak for the chicken, which costs under a hundred hryvnia,” – surprised buyers. The market prices for two-three hryvnia cheaper, but the trend is to higher prices.

The sellers explain this lack of chicken in the market. “We explain that closed factories, there was only one “gavrilovka”, and all. So rising prices,” – said the saleswoman. Experts also are assured that the factory work, but the chicken is really lacking. The price increased due to increase in exports this year abroad has sent 42% more than last year. Ukrainian Chicks are sold in Asia and the Middle East, the manufacturers and sell them for $ 2 per kilogram. In Europe, the domestic chicken is, but in small quantities – the European Union has koterova the import of Ukrainian poultry. But did not koterova departure of the Ukrainian workers and this significantly affects the price in Ukraine, say local producers. They say that the labor market in Ukraine recently quite busy, and qualified personnel that worked in our production moved to the Czech Republic and Poland on a huge salary.

Today in major retailers the chickens get on average 42 hryvnia per kilogram. The price of transition – the manufacturer is not profitable to produce meat for the money, because the price of production has grown significantly: electricity, gas and feed. So in the near future wholesale price will increase as the two dollars per kilogram. The new prices have already felt people – especially pensioners. The amount of meat in their diet decreased. “These prices are not for us, not for the pensioners,” they complain.