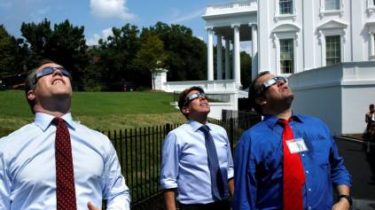 Yesterday’s solar Eclipse caused American companies damage to 694 million dollars. All due to the fact that the employees left work and went to observe this natural phenomenon.

On average, Americans watched a solar Eclipse about 20 minutes. This is stated in the report of the company Challenger, Gray & Christmas, reports “Interfax”.

At the same time in the United States, where the Eclipse was seen best of all, received millions of dollars from tourists who come here especially for this event. For example, the city of Nashville, Tennessee took from 50 thousand to 70 thousand tourists Monday who spent 15-20 million dollars. About it writes USA Today. The revenues of the state of South Carolina could reach $ 43 million, and South East Idaho where the picture of the Eclipse was most impressive, was visited by half a million people.

It is noted that the figure of nearly 700 million loss pales in comparison to other events that cost employers in the US is much more expensive. So, the final stage of the basketball championship among the student teams (the so-called “March madness”) each year, it costs $ 2 billion, assuming that about 80 million employees spend at least an hour of working time to follow the matches.

As President of the United States Donald trump with his wife Melania was observing a solar Eclipse, read and look at photos Dnia this link.