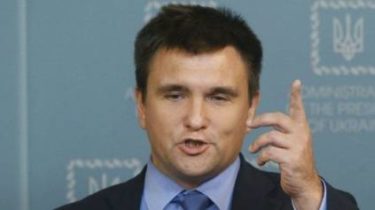 The Minister of foreign Affairs of Ukraine Pavlo Klimkin sent a letter to the editor of the American edition of The New York Times which had earlier published an article about the alleged possible use Ukrainian engines in ballistic missiles of the DPRK.

The official said that concerned about the figures published in the material without evidence.

“As the Minister of foreign Affairs of Ukraine, and also prepared aerofest, I want to say that my country could not participate in assisting the missile programs of North Korea,” – said Klimkin in a letter published on the newspaper’s website.

The foreign Minister noted that the lines for the construction of rockets RD-250 in Ukraine were decommissioned in 1992, and the instructions for the production of missiles under high protection and the protection of the security forces.

“But I doubt that North Korea could achieve what she did without help. The global community must now meet to conduct an international investigation to know who is responsible for this”, – stated in the text of the letter.

Expert Michael Elman, on the basis of the words of which were written in the article stressed that does not believe that the Ukrainian authorities knew or contributed to the fact that the engines come from Ukraine.

“Baseless fake” a missile launch by the DPRK with the help of Ukrainian engines and called the President of Ukraine Petro Poroshenko.