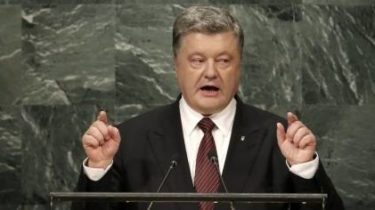 The President of Ukraine Petro Poroshenko at the session of the UN General Assembly will present the initiative to the introduction of UN peacekeepers in the occupied territory of Donbass.

He stated this during his working visit to Luhansk region.

“The issue of the UN peacekeeping mission and a military mission of the OSCE, I’ll be honest with you, moving hard enough. Everything depends on the categorical refusal of the Russian Federation to establish peace in the Donbas. Moreover, the categorical refusal to leave Ukraine alone. But I’m sure the water wears away the stone. Therefore, the idea of peacekeepers I’m going next month to present in new York at the session of the UN General Assembly,” he said.

Poroshenko noted that despite the fact that Russia is a permanent member of the UN security Council and has veto power, Ukraine needs to strive to resolve against peacekeepers. According to the President, “it would be fair, because Ukraine remains one of the largest contributors of UN peacekeeping”.

“This decision shows once again demonstrate who is who, especially if Russia wants to use the veto,” – said Poroshenko.

The President also recalled that Russia vetoed the initiative, supported by many countries, to establish an international Tribunal in connection with the Downing of the Malaysian airliner MH17.