“Completely mad”. Zhirinovsky has responded to the accusations of the GPU in the financing of terrorism 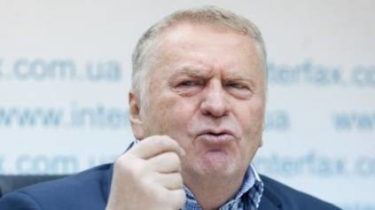 The leader of the liberal democratic party of Russia Vladimir Zhirinovsky believes that the suspicion of it in the financing of terrorism indicates a “final madness” of the GPU.

He stated to RIA Novosti.

According to Zhirinovsky, for the decision of the GPU should be deprived of work.

“Never any money we collected, but, of course, we regularly send humanitarian aid to residents of Donbass. This medicines, products that can be kept long, clothes, some necessities, transportation several times sent there”, – explained the controversial politician.

“I am a citizen of the greatest country”. Zhirinovsky has prepared a version of the oath for citizenship of the Russian Federation

Recall that the GPU has established that Zhirinovsky in March – April 2014 created and led group for material support “LNR” and “DNR”. It is noted that the group included some deputies of the state Duma of Russia and members of the liberal democratic party of Russia, in particular the heads and representatives of regional branches of the party which carried out the collection of money from citizens of Russia.

This group, acting, including, at the request of the head of the terrorist group “Somali” militants “Givi” for 2014-2017 supplied terrorists 6 vehicles of Russian production with high inputs and operational capabilities.