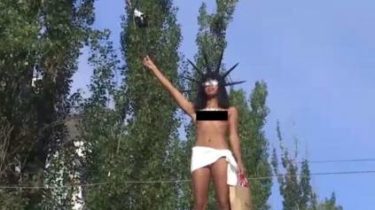 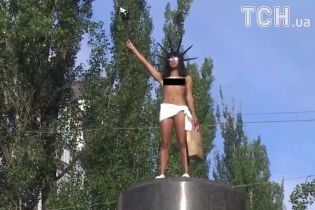 One of the activists of the group Femen today, August 23, climbed on the pedestal of the demolished monument to Lenin in Kiev’s Topless, with crown and torch, and had to remind the symbol of the United States – the statue of Liberty. In this case, the pedestal was displayed a poster with the inscription “Chocolate independence” (“independence of Chocolate” – ed.).

Colorful, “savage” from Femen received a second suspicion for a Nude performance in front of Poroshenko and Lukashenko

On the naked breast women was written by Roshen – the name of the candy company, which President Poroshenko conveyed to the trust. Getting to the base of the stairs, she began to scatter around the candy brands mentioned.

Videoobmena famenka climbed on the pedestal of the former Lenin in Kiev, depicting the statue of Liberty

Later, her bandmate – Angelina Dias Where Cintas explained that in this way the Femen wanted to draw the authorities ‘ attention to “women’s issues”.

“As a girl, living in Ukraine, I don’t feel secure, I don’t feel that women’s issues are raised and resolved. We can say that in all the years of Ukraine’s independence main asset, as we all can see now, is the enrichment of Petro Poroshenko as a chocolate magnate, sovmestitelstvu he is our President, that is, his Empire is growing impoverished population,” she said.

Earlier in July, Femen “lit up” at a joint press conference of Alexander Lukashenko and Petro Poroshenko in the presidential administration. Then Angelina Dias Where Quintas Topless, shouting “long live Belarus!” and “Stop” flashed before the audience. The movement explainedthat so expressed his attitude to the visit of the Belarusian dictator.