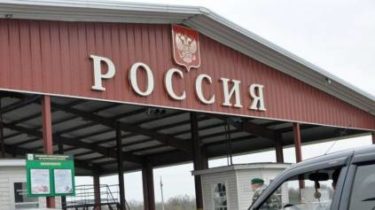 Russian border guards do not pass on the territory of Russia of cars with numbers of “DNR” and deploy them back to the Donbass.

This was announced on his page in Facebook the coordinator of group “Information resistance”, MP from “popular front” Dmitry Tymchuk.

“The border service of FSB of the Russian Federation ceased to pass through the border into Russia of vehicles with license plates of the so-called “DNR” from the occupied districts of Donetsk region”, – he wrote.

According to Tymchuk, the cars without explanation return to the territory of “DNR” or offer to change the license plates on the Ukrainian.

“Among the employees of the border service of FSB of the Russian Federation, this decision is due to the complication of the criminal situation in the border areas of the Russian Federation and the increase of criminal and administrative offences which are committed by immigrants from the temporarily occupied territories of Donbass”, – said the MP.

Separately Tymchuk also noted that such unofficial ban has been repeatedly introduced, but after a certain period of time appeared.

We will remind, earlier Tymchuk reported that Russia strengthens border control at automobile checkpointsin the occupied area of the border in the Luhansk region (“LPR”).

In particular, while crossing by citizens of the Russian PP “Gukovo” passport data entered into the appropriate computer database of the Border service of FSB of the Russian Federation. Depending on available information about the person, it is simplified, plain or reinforced border and customs control.