The next plank 18: gas prices for cars will not stop your growth in the next few days 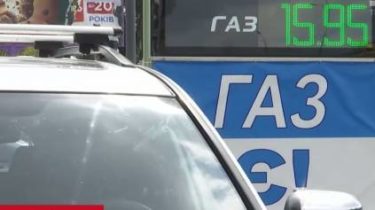 The price of liquefied petroleum gas went up rapidly , and from 12 hryvnias in just a few days soared to 16, which is not the limit. Motorists do not hide their outrage at the situation, says the story TSN.19:30.

“I was just in shock. A couple of days the price has risen really. This is a critical price,” – says the taxi driver Constantine, which runs on gas. Its present price is unprofitable, the driver – a man working at a loss. “I, at its expense, refuel, and at the cons,” he says.

The jump in prices for liquefied gas experts attribute primarily to the rising cost of crude oil and the Russian monopoly. Analysts say that Russia is involved in 68% of this fuel, which is sold in Ukraine. “The market is very dependent on how the Russian Federation is ready to share raw materials”, – experts say, and explain that now Russia is slowly but preoriented European markets and stimulates domestic demand for gas.

At gas stations the price of gas reached 16 USD. Will be even more expensive

Forecasts for the future experts are optimistic, because the present condition is called seasonal variation. In September, they expect the rollback of prices to their former positions, and some even put the figure of 10 hryvnia per liter. However, the question of the shortage of imports for Ukraine remains open, because in the autumn the Europeans are starting to buy gas for the heating season. Therefore, excessive optimism, most experts do not.

Exploring the cost of gas on the Ukrainian filling stations, the journalists asked for comments to the Ministry of energy and coal industry of Ukraine, but have not found the time to meet. For Wednesday, August 23, on the website of the relevant Department appeared only three news: on technical re-equipment of mines, that reforms are on track and the greetings of the Minister with the national flag Day. About the jump in prices for liquefied petroleum gas, which is used by millions of Ukrainian motorists. “Today, everyone is busy. Celebration and public events. Today the Minister is wound, and the Cabinet was”, – explained the reasons for this in the Ministry.

Drivers, meanwhile, continue to calculate the cost of fuel for their own wallets. Who determines the limit point at which to refuel and control the car would not make sense – 18 UAH. They say, then it will be easier to drive on gasoline. The editorial office of TSN did not lose hope to get a response from the Ministry of energy and coal industry, at least after public holidays. To find out what plans, if plans, the government need to do to curb the prices of liquefied petroleum gas.