Ukrainians told how they would vote on joining NATO – poll 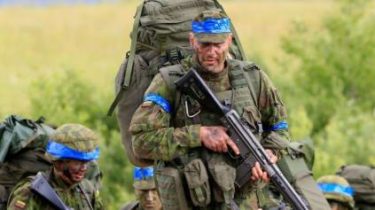 In June 2017 on the question “If today was held a referendum on Ukraine joining NATO, how would you vote?” 40 % of Ukrainian respondents said that they would give their votes for NATO, 27 per cent would vote against such a Union, and 12% would not vote and 22 % could not answer the question.

For comparison: in March 2014 on the question “If today was held a referendum on Ukraine joining NATO, how would you vote?” 43% of respondents said they would vote against the accession, 34 %, and 9% would not vote and 13 % were unable to determine the answer.

The defense Minister said that Ukraine will qualify for NATO membership

In November 2015, the Ukrainians answers to the same question was significantly different: 48% of respondents would vote for NATO membership, while 30 % would vote in the negative, 10% would not go to the polls and voted, and 13 % could not answer the question.

In September 2016 the situation has changed somewhat: 43% would vote for NATO membership, 29 percent would vote against such entry, 11 percent would not vote and 17% are unable to determine the answer to the question of the survey.

If you talk about how divided the commitment to NATO membership by region, in Western Ukraine, 59 % would vote positively, and in the East of Ukraine only 16% would vote for joining the Alliance. Relative to the center of the state, here 50% of respondents in the affirmative would vote for NATO membership if a referendum were held today, and in the North of Ukraine, only 28 % said would cast their votes in support to this Alliance.

Meanwhile, the Alliance assured that they will continue cooperation with Ukraine in the issues of defense and economic reform.

On 6 July Ukraine’s President Petro Poroshenko has signed the Law of Ukraine “On amendments to some laws of Ukraine concerning Ukraine’s foreign policy”. According to him, one of the priorities of national interests defined by the integration into the Euro-Atlantic space of security , with the aim of gaining membership in NATO.