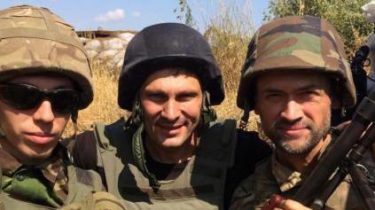 The actor, a star of Russian cinema Anatoly Pashinin, who long ago moved to Ukraine from Moscow, serves as a volunteer of the Ukrainian army in the ATO zone. About this in his Facebook said the military TSN correspondent Andrew Tsaplienko.

“I didn’t think that I will celebrate Independence Day in the company of someone from the enemy trenches. But “the Lieutenant Doronin” for us! The star of Russian cinema, the hero of the cult TV series “Storm gate” and a month as a volunteer of the Ukrainian troops, Anatoly Pashinin is celebrating the holiday with a sister on the front. Where bullets, blood, and heroism are real. And Independence day has a real unique taste. Cheers, brothers and sisters!” – written by the war correspondent under the photo with the actor.

Details the history of the transformation of the Russian actor in the Ukrainian volunteer Tsaplienko will tell this Sunday, August 27, TSN.Week.

Never thought I will spend my Independence Day in the company of someone from the enemy trenches.)) But “the Lieutenant Doronin” for us! Star …

Pashinin has long criticized the Russian government apologized to the Ukrainians for the Russians. And then finally moved to Kiev. The actor previously visited the front as a volunteer fighters took the necessary things and wore the Chevron volunteer battalion.